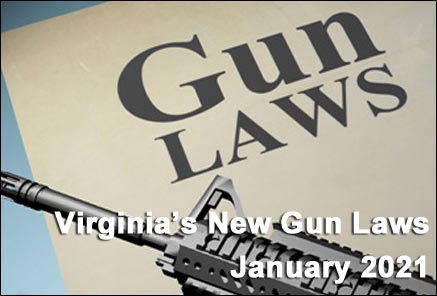 Virginia passed several new gun control laws in 2020. Some of those laws include:

Two of these new laws are more interesting to me than the others. Virginia Code section 18.2-308.2:5 was amended to say:

“No person shall sell a firearm for money, goods, services or anything else of value unless he has obtained verification from a licensed dealer in firearms that information on the prospective purchaser has been submitted for a criminal history record information check . . . and that a determination has been received . . . that the prospective purchaser is not prohibited under state or federal law from possessing a firearm . . .”

This is what they are calling the “Universal Background Check.” It is supposed to close the so-called “Gun Show Loophole.” Prior to this law going into effect there were few restrictions related to a private individual selling a single firearm to another private individual who was lawfully entitled to own a firearm.

Clearly, this law will prevent many people from selling their firearms to their friends, family, or strangers they meet at gun shows. But it does not prevent anyone from giving their firearm as a gift to another person that may lawfully own a firearm. So, you can give your non-felon spouse or child a gun for Christmas or their birthday without fear of violating this law. Also, it does not prevent you from leaving your firearms to another person in your Last Will and Testament or Trust. This law could have been far more restrictive and made the lives of gun owners far more difficult had the legislature used the word “transfer” rather than “sell.” Had they prohibited “transfers” then you may not have been permitted to gift or bequest your firearms.

The other new law that I find to be interesting is Virginia Code section 19.2-152.13 which creates “Substantial Risk Orders.” Prior to this law being enacted there was no real mechanism in place to take away a person’s firearm unless they had committed a crime or were subject to a protective order. Repeatedly, we saw shootings where the gunman had previously raised concerns about his own mental health through his actions and words. However, since he had not committed a crime the police had no recourse but sit and wait for him to commit a crime, or worse, kill someone. These Red Flag laws, or Emergency Substantial Risk Orders, are the Virginia Assembly’s response to that situation.

Upon the petition of an attorney for the commonwealth or a law enforcement officer, a judge… upon a finding that there is probable cause to believe that a person poses a substantial risk of personal injury to himself or others in the near future by such person’s possession or acquisition of a firearm, shall issue an ex parte emergency substantial risk order. Such order shall prohibit the person who is subject to the order from purchasing, possessing, or transporting a firearm for the duration of the order . . . No petition shall be filed unless an independent investigation has been conducted by law enforcement…

As a gun owner, I am deeply suspicious of any law that may limit my right to own a firearm for personal defense. I had serious concerns about this Red Flag law until I read it. In reading the foregoing, I noticed several key factors:

While it is true that law enforcement and courts make mistakes and innocent people get convicted of crimes they did not commit, I feel that this law has been written succinctly enough that it will not be used to take away the firearms of people that do not pose a danger to themselves or others. I want all mentally sound, law abiding citizens to be able to own and possess firearms. However, I would like for the courts, after a full hearing, to be able to remove firearms from the home of a person that has overtly demonstrated that he is mentally unstable and likely to turn those firearms on his neighbors or a classroom full of children. I believe that this law strikes that delicate balance of preserving my right to own a firearm while allowing the courts to deprive people of firearms that have been proven to be mentally unstable. Obviously, no law is perfect, this law will not stop all shootings, but it will at least give law enforcement an opportunity to take away the means of a deeply troubled person to inflict harm on himself or others.