New Minimum Wage Laws in Virginia… Good for Some, Maybe Not for Others 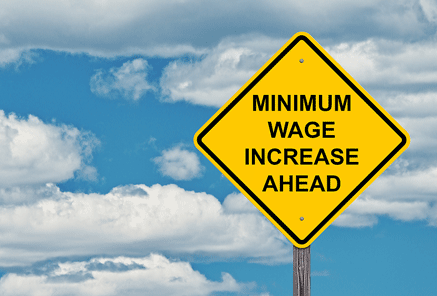 For many years, the federal minimum wage has been set at $7.25 per hour. Over the last few years, across the country, states and large corporations have been voluntarily increasing their starting wages, perhaps in anticipation of the law changing. There have been hot debates on whether we should raise the minimum wage.

On one hand, we have the folks saying that raising the minimum wage will help the working-poor and raise their standard of living. On the other hand, you have micro and small businesses claiming that they can not afford to pay entry level workers upwards of $15.00 an hour. To be sure, there is some truth to be found in both arguments.

On the other hand, micro business owners, particularly in small towns, may not actually be able to afford to hire that first helper, or young worker at $15.00 an hour. Imagine a lawn service where you have one young business owner who buys a truck and a lawn mower, and it is cutting grass for a living. He himself is barely making $15.00 an hour, but he wants to expand and get more yards. He could afford to pay a high school student $9.00 an hour in the summers as temporary labor, but he just cannot swing $15.00.

For that young would be employer, he is better off not taking those extra yards and not hiring that high school student for the summer. In this situation, the young business owner loses, the high school student loses, and the homeowner that wanted his lawn cut loses.

Well, the debate is over; the Virginia governor signed a bill that will substantially increase the minimum wage over the next several years. The minimum wage in Virginia will increase on May 1, 2021. Virginia Code section 40.1-28.10 Minimum wages was amended, in part, to state;

Like most laws that meddle with the economy, there will be winners and losers. Big business will win big because they, not only can afford to pay $15.00 and hour, but in fact already have started doing so in many places.

Micro businesses that have narrow profit margins will lose because they will be forced to lay off staff rather than give them the required new wages. Students and young workers will lose because small businesses will no longer be willing to take a risk by hiring them at $15.00 an hour. Low skill workers that cannot produce at least a $15 an hour value for their employers will be laid off.

The biggest losers of all will be the workers that are currently making $17 to $25 an hour. They will not receive wage increases for several years because their employers were forced to expend their entire payroll budget allocated for raises on the workers that previously made $12 to $13 an hour.

So, raising the minimum wage in Virginia to $15 an hour will dramatically affect those making $8.00 an hour. It will only have a slight impact on those making $13 or $14 an hour. But when you change the wage structure of 42% of your workforce it will have some degree of impact on the cost of goods and labor.

Will this be the end of the world? Will it destroy Virginia’s economy? The short answer is: No! Again, I remind you, that in 1968 employers paid their minimum wage employees the inflationary equivalent of $11.96 an hour. So, over the course of the last 50 years, with this new law, Virginia will have increased the value of the minimum wage by about $3.04 an hour when accounting for inflation.

It will take a few years for employers and employees to adjust to the new economy. I am sure prices will increase to compensate for higher wages. Automation will become more cost effective for employers to invest in and will eventually replace repetitive jobs.

But low-skill workers will eventually find a place in the new economy. The new law takes these growing pains into account by having the minimum wage increase over a five-year period. Employers and employees will have until 2026 to adapt and make the necessary adjustments.